I have been away for the last week on a pheasant hunting trip with my husband. I wanted to post something before we left, but I just didn’t have the time.  So now I feel like I have all these things I want to talk about and post!  But, I have to slow my roll so I don’t set a precedent for over-delivering! (grin)

As I sit at my little corner office and think about what I want to post next, I’m sipping a glass of port.  I love a glass of port before bed, it’s the perfect “reflection drink”.  Aaand a post idea is born.

Port is a fortified wine that is produced in Portugal (I’m guessing you figured that out yourself!).  In fact, only those wines produced in the Douro Valley of Portugal can legally be designated “port” or “porto” (anything else should be called “in the style of port”). 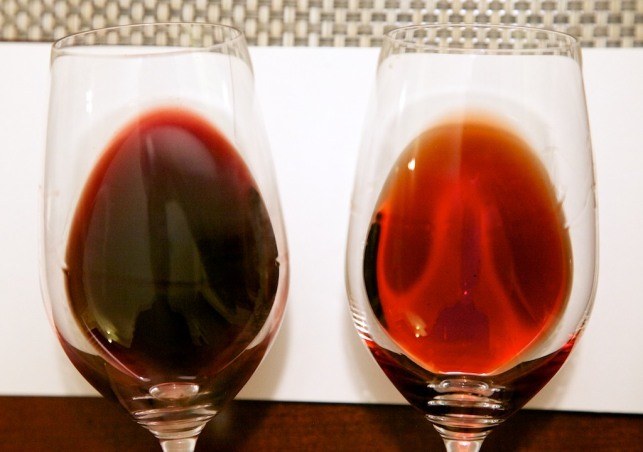 I borrowed this picture from the internet to show the difference in color between ruby (left) and tawny (right) port.

The two main types of port are ruby and tawny, and are the only two I’ve tried.  There is another type, a white port that I know very little about.  When I was exploring the confusing, somewhat intimidating world of port, I asked my local sommelier about white port.  He laughed and said I didn’t want to try that, so I later checked with my friend Google to find the reason.  One thing I read was that white port is often derided by traditionalists, but was gaining popularity as an apertif due to its sweetness and lower alcohol content.  I’m intrigued to try it, but every time I think about it, I remember that laugh and sadly shuffle away.

I was at a restaurant the first time I tried port; after some questions from my server, I was given a glass of ruby port.  Ruby is a younger, more fruit forward port.  The description reminded me of Zinfandel, which is one of my favorite red wines, and I was pleasantly surprised to find that I no longer had to fear port.  In fact, I found after that small glass, port was my friend.  My warm, fuzzy little friend.

The 10 year, not too different from the Fine Tawny Porto.

Later, I had occasion to try a tawny port and was surprised to discover how much I loved it.  I later found out that ruby port is often considered a great “starter port” for those people like me, who might be intimidated by fortified wines.  While tawnys have become my favorite, I will always think fondly of ruby for introducing us.

Tawny is so called because of its amber color.  It’s also aged longer than ruby, anywhere from about 5 to 50 years.  I’ve tried tawnys ranging from 5 years to 30 years, and they become more expensive the longer they’ve aged.  Which is how it should be, I think, as I age and become worth more myself.

An Australian Tawny wine in the “style of” port. Quite good.

For me, port is a cool weather drink.  It can be a little heavy, and the alcohol content is quite high at 17% and more (for the ports I’ve tried).  A serving size is anywhere from 2-4 oz, but I leave this up to you – I don’t judge.  I’ve been served port in Spanish-style sherry glasses, but I really prefer my red wine glass for this purpose.  One of the things I enjoy so much about port is the bouquet, and I just can’t get my nose in one of those tiny glasses!

I mentioned that tawny port becomes more expensive the longer it has aged (or rather, becomes worth more).  My favorite go-to is Taylor Fladgate Fine Tawny Porto at less than $20 a bottle.  When I’m splurging, I buy the 10 year, the 20 year, or the 30 year, depending on my budget.  Mr. Pants does not like port, so it’s hard for me to justify the more expensive versions when the Fine Tawny Porto is so good.  It’s not as mellow as those that have aged more, but it’s not harsh, either.  I think it’s a great budget tawny.

If fortified wines have intimidated you, start with a small pour at a restaurant.  It really is less scary than it seems.  And don’t let anyone’s laughter stop you.  In fact, I plan to pick up that bottle of white port the next time I’m out.